The Scandia Food story starts 90 years ago, in Sibiu, a Transylvanian town well – known for its Saxon culinary traditions.
Since then, the name of the company has stood for high quality, reliable brands, and Research and Development expertise. 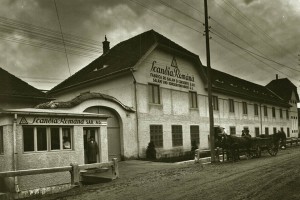 1922 – Josef Theil – ethnic German, renowned at the time in Sibiu among sausage and cold cuts makers, sets up “”The Theil cold cuts and canning factory”". The Theil factory quickly earns notoriety due to the modern technologies used, the production of products of the highest quality, and their distribution in a growing market.

1929 – 1935 – The Theil Company experiences continuous growth; local representatives in all the big towns in Romania, distribution through its own transport capabilities, expanding of product portfolio; from salami – as the main product – to: sausages, cold cuts specialties, canned meats (ham, liver sausage, liver pate, goulash, canned sausages). The Theil factory maintains its standards and capacity despite the Great Depression.

1990 – 1996 – Transition period – the factory exports its entire production to countries such as; USA, UK, Germany, the ex. Soviet Union, and Japan, until 1996, when it starts producing again for the Romanian market.

2001 – Following a public auction the company is taken over by the current owners, becoming a company with 100% private ownership.

2010 - Scandia becomes Scandia Food, following one of the most complex re-branding processes ever undertaken in the Romanian market.